THE GREATEST HISTORIES RELATED TO FANCES 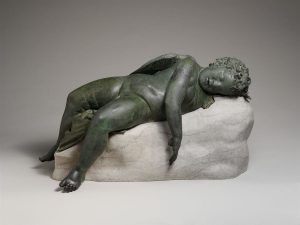 Fakes exist almost as much as the works of art themselves. And with the development of technology, the opportunities for dishonest artists and art dealers are only increasing. Experts say that now on the art market, less than half of genuine works.
Stories about fake works of art are always surrounded by legends, books are written about them, films and TV shows are shot. We have collected the most high-profile stories associated with fakes – from Michelangelo to our days.
Fake hands michelangelo
It seems that the forgery of works of art is the lot of artists who could not be glorified by their creativity. But among the creators of fake works there are also famous authors.
One of the most famous stories is related to Michelangelo. In 1496, he carved a statue of a sleeping angel. And then he buried the work in the ground in order to pass it off as an ancient sculpture. After some time, the fake was disclosed, and the buyer demanded his money back. But he was so impressed by the sculptor’s talent that he asked the art dealer who sold the work to leave Michelangelo his fee.
The statue of Tutankhamen’s granddaughter
Any story associated with the name of the legendary Pharaoh causes a great resonance. Therefore, the sculpture depicting the granddaughter of the Egyptian king was sold at Christie’s for an expectedly high amount. Work acquired for his collection of the Bolton Museum in Manchester. The experts of the auction house and the museum staff recognized the sculpture as genuine and determined that its age is more than 3,300 years.
The following year, it turned out that the work was made by a resident of Manchester, Sean Greenhalgh, in his barn. Together with his parents, he faked works of art for 17 years and earned more than a million euros. The court sentenced Sean to 4 years and 8 months in prison. But his works, nevertheless, came to the exposition of the museum – however, now they are shown in the hall with the most famous fakes.
Even fake Monet and Modigliani can cost expensive – about $ 20,000
Hungarian artist Elmir Gori sold more than 1000 fakes around the world. His specialization was the work of Modigliani, Degas, Picasso and Matisse. According to experts, just for these works paid more than 50 million dollars. Gori created his fakes in the 50-70s – but many of these works are still in the exhibitions of museums and private collections.
His career as a sub-artist of paintings began when one lady mistakenly took his ink drawing for the original Picasso. Soon, Gori began offering “works by Picasso” to Parisian galleries, being called the Hungarian aristocrat, who managed to take out his collection. The fakes of Gori were distinguished by their high quality – somehow the fake drawing by Matisse created by him acquired the museum at Harvard University.
In 1966, Gori sold 56 fakes to Texas magnate Meadows. Upon learning that most of the works from his collection – fakes, Meadows demanded to catch and condemn Gori. But he managed to escape in Spain, where he settled in a villa on the island of Ibiza. When Gori learned about the intention of the Spanish authorities to deport him, he committed suicide.
Gori believed that in terms of skill he surpassed artists whose style he copied. Whatever it was, experts admit that he created works of very high quality – the pictures written by his hand are estimated at $ 20,000. Here are just fakes of his works have become common! Now, collectors, seeing his work in the gallery, are not asking “Is this Modigliani?”, But “Is this Gori?”.
In the French museum, they found that 60% of their collection is fake
In a museum dedicated to the French artist Etienne Terrus, they found that
82 out of 140 works of their collection are fakes. Doubts were sown by expert Eric Forcade, who, in a letter to the museum authorities, doubted the authenticity of the paintings in the exhibition.
The museum gathered an expert commission, which conducted a detailed examination of its collection. In many works, the canvas does not correspond to the one used by the artist, and some of the buildings depicted in the landscapes were built after the artist’s death. One canvas of Terrus is estimated at about 160 thousand euros.
Sotheby’s and Christie’s simultaneously sell the same artworks.
Pual Gauguin – A Vase of Flowers at the National Gallery of London
An Iranian art dealer Eli Sakhai bought a genuine still life of Paul Gauguin, ordered a copy of the painting, and then sold it, attaching the original documents to the work. After a while, he decided to sell the real work at Sotheby’s. At this point, the fake managed to change several owners – and it was put up for auction at Christie’s.
What was the general surprise when two absolutely identical pictures appeared in the catalogs of two hostile auction houses! But the police failed to uncover the art dealer scheme, the work he was selling was acknowledged as genuine – Sahai saved her £ 169,000. Truth managed to find out later.