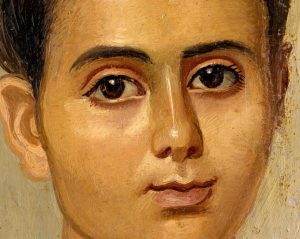 These amazing works of art, which are often called “icons before icon painting”, are not just historical values. They can serve as a magnificent and impressive illustration of the mutual penetration of cultures.
The Fayum portraits were created for the ritual of burial in ancient Egypt during the times of Roman rule of the first and third centuries of our era.
The first find in the Fayum oasis in 1887 assigned them the name Fayum. Portraits continued to be called, even discovering similar treasures in other parts of Egypt. To date, about 750 ancient masterpieces have been collected.
Female mummy with a portrait. Antinopol, Egypt, II century AD Louvre, Paris
First discoveries
The first Egyptian portraits for Europe were discovered by the traveler Pietro della Valle: in 1615 he brought two samples from Egypt. In the 1820s, thanks to Leon de Laborde and the British consul in Cairo, Henry Salto in the Old World, several more portraits appeared.
But they gained real fame by the end of the 19th century. Then the historian and traveler Daniel Marie Fouquet, while in Egypt, heard the story of portraits of the dead found in the tombs, mummies swaddled over their faces. He immediately went to the place of discovery, but found only two surviving images of the fifty.
Soon, amazing portraits attracted the Austrian collector Theodor Graf. He bought part of the picturesque tablets from dealers and showed him to Egyptologist and writer George Ebers. Recognition by Ebers of the authenticity and significance of the find made it possible to open it to the world. In the late 1880s, portraits visited exhibitions in all major European capitals, and were also shown in New York. Portraits are interested, they talked about.
New sensation was not long in coming. In 1887, the British archaeologist Flinders Pitri discovered 81–90 mummies with portraits in the necropolis of the Roman city of Hawara (near Fayum), according to various sources. In the next expedition, in two decades, Pitri found 70 more portraits, but some of them were in a pitiful state. Still, the work of Petrie was the first example of the systematic study of these ancient masterpieces for subsequent explorers.
A new stage in the history of the study of Fayum portraits put German archaeologist von Kaufman. In 1892, he opened the Tomb of Alina, and in her – several famous portraits of our time.
In the IV century BC Egypt was conquered by Greece, and in the I century BC – Rome. The intertwining culture of the conquerors and ancient Egyptian traditions formed a new incredible stream.
The Greek influence was reflected in the ability of artists to convey volume using light and shade, to use perspective, to apply color. One of the main techniques of the Fayum portraits, encaustic, came from Greece.
Ancient Roman portraiture brought more personality to the image. The manner of writing became free, the artists became more attentive to the features of the face.
According to the ancient Egyptian tradition, such portraits should be the subject of the cult of the dead. And then the neighborhood of different cultures gave rise to two scenic directions: the Hellenistic and Egyptian. The Romans, though they had adopted the local rites, retained their custom of decorating atriums with portraits, and only after death – a mummy. Portraits for the Roman nobility were painted by experienced artists and were of high quality.
The second direction did not care so much about artistry and created portraits in the local Egyptian manner exclusively for the funeral rite. Gradually, the Egyptian current prevailed over the Hellenistic.
This feature reveals one of the mysteries of the Fayum portraits …
Youth portrayed
Most of the portraits depict young people and children. At first it was explained by a short lifespan. Along with this, a version emerged that the portraits were made “for the future” in 15–25 years. Thanks to computed tomography, modern researchers have confirmed this assumption and came to the conclusion that before becoming a ritual attribute, portraits, according to Greek custom, decorated the guest rooms of residential buildings. This means that the age in the portrait and the age of the deceased are different, but not always. Nevertheless, part of the portraits were already made on mummy bandages, which means after the death of a person.
Real people. The Fayum portraits, like ancient photographs, show real people who lived many centuries ago. Therefore, each portrait is a story, it is a unique inner world and character of an individual.
Asymmetric faces. For life, the phenomenon is normal, and the ancient artists tried to convey the perspective of the image.
Big eyes. We began to write people with enlarged eyes from the 2nd century AD. And, rather, it affected Egyptian culture. According to the beliefs of the ancient Egyptians, the soul leaves the body through the mouth, and returns through the eyes.