“THE WORLD THAT I HAVE REMOVED, DIED” 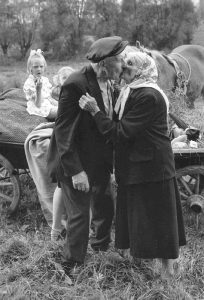 Romualdas Pozherskis – Honored Worker of Culture of Lithuania, a member of the Union of Lithuanian Photographers and the International Federation of FIAP, winner of the Alfred Toefler Award for his contribution to the development and preservation of the cultural heritage of Central and Western Europe. Creativity Romualdasa has long been recognized as a classic of photography and the highest level of photography. Sincere, sincere and open, he told us about his understanding of art and creative ways.
– Romualdas, hello! Just want to say thank you so much for taking the time to talk with us! Please tell us when you started taking pictures? If we talk about the very first attempts, even before the events of 1972 in Kaunas?
– This is a very interesting topic. For a long time I collected the history of my family and compiled a genealogical tree. It reached the 1400s. Among my ancestors was the following story. My uncle studied in St. Petersburg and before the revolution of 1917 he was the designer of railway bridges around Baikal. In 1918 he was shot. An order was issued to blow up the bridges. But he could not do it. I could not destroy what I created myself … Before this event, he brought three boxes with glass negatives to Lithuania. He was shooting a lot of Baikal and Mongolia. All these negatives disappeared without a trace during the Second World War. I heard a lot about this in childhood. My father told me. I started shooting at school, in the 7th grade. My father taught me a lot.
In 1972 there were demonstrations in Kaunas, which I shot. I was arrested, I spent a week in prison, for which I was expelled from the Komsomol. I realized that I must do something in life. Because life goes very fast. So I took up photography. My friend Virgilius Shontoy made a project and soon organized an exhibition. I received an award from the Komsomol. We were accepted into the Kaunas Club of Lithuanian photo artists. Our teacher was Alexandras Maciauskas. Our work began to actively exhibit in Europe. Thus, I joined the group of the best photographers in Lithuania, and Antanas Sutkus told me: “If you take good photos, you will receive all the necessary equipment, film, we will buy your work, and you can provide yourself with photography.” We had to do good work! To this we have sought from the very beginning. You know, sometimes people ask me: what do I not know how to shoot? And I answer: I do not know how to shoot static things. Here, for example, a glass of beer. I can shoot it for advertising, so that was beautiful. But I do not like it. I love to shoot emotions, all life feelings. I know how to get up, I know where that can happen.
– Please tell us about the photos that are most dear to you.
– This is, of course, my very first job with motocross. I myself went on a motorcycle for 4 years, I was a biker. And so, Matsiauskas sent to the races and said to remove the inspector. But when I arrived, I saw this guy and took it off.
It was a landmark for my work photography. She has exhibited many times and won many awards. This series was easy for me. I was pleased with this sound, smell, emotions …
My other favorite photo is the kiss of the grandparents from the Rural Holidays series and the baby on the swings from the Old Town series. I always shot in series. I have no single jobs. My series is small stories, plots. This is not like a poem, but rather like a novel with different chapters.
We are friends with Latvian photographers, they work more with single shots: one photo, one plot. I tell my students: take 10 photos, and they should have a beginning, a climax and a conclusion. And it must be clear what you want to say. Morality should be visible.
By the way, the selection of photographs for exhibitions, prints, slideshows, in many ways varies. And this also needs to be taken into account.
– And did you choose the rest of your projects?
“As I said, McIuskas sent me to motocross.” Then I lived in Kaunas in the Green Mountain region. Downstairs was the old town. It seemed to me a terrible and unknown world. It was noisy, they ran, it seemed to me, angry children, alcoholics wandered. Once I watched Bruce Davidson’s album with city photos. I saw him take pictures and thought that I could try something similar in the old town. And I found there such things that I understood: this world is also interesting to me! Shoot this, too, must be able to. In motocross you do not see. Everyone is completely absorbed in their emotions. And here it was more difficult. Everybody sees you.