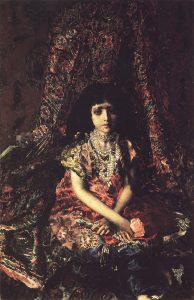 In every country, modernity had its own name, face, and character. In Russia, the style was called art nouveau, and its representatives skillfully interweaved folklore and that mysterious Russian soul into modern art. This was done gracefully and unobtrusively.
Mikhail Vrubel. All artist demons
“Demon sitting” – a picture that can be attributed to the symbolism and modernity. According to the semantic content, this is rather symbolism, because, as Vrubel wrote, “the demon is not so much evil as suffering and sorrowful, with all this a powerful, dignified spirit”. He is a symbol of the inner struggle of man.
At the same time, the picture has all the features of art nouveau: a clearly defined figure, plant motifs, huge eyes, the chanting of languid beauty – everything is in place! The canvas resembles a stained-glass window, which is also typical of modernity (at least take the works of the classics Alfons Muhu and August Klimt). Unfinished Flying Demon (1899), Demon Prostrate, Demon and Tamara – all of them were designed in the framework of art nouveau.
Special attention is given to the painting “A Girl on the Background of the Persian Carpet, created in those times” (1896), when little-known Vrubel arrived in Kiev to paint the Church of St. Cyril. In it, as in the artist’s illustrations for fairy tales, the Slavic household flavor and folklore are rethought.
That’s the story!
The artist’s wife, singer Nadezhda Zabela. I recalled the following period of the creation of the Demon Poggled Daemon (Autumn 1901): “The delegates of the Vienna Secession dined recently (an association of Viennese representatives of modernity, including Klimt – ed.). They are delighted with Misha and they all want to take to the exhibition; unfortunately, he will not make it to the “Demon”.
Alexander Benois
The art of Benoit was as thin as the features (judging from the portraits), as well as the taste of Benoit: the artist’s pictures literally glow like stained glass windows. In 1916–1918, Benoit created illustrations for Pushkin’s poem The Bronze Horseman, a stunning example of Russian art nouveau. His sketches for costumes for the Russian ballet Dyagilev – a classic modern, timeless and nationality.
Alexander Nikolaevich Benois. Dolls
Dolls
Alexander Nikolaevich Benois
XX century
Victor Borisov-Musatov
Musatov was close to the artistic group “World of Art”. The fate of the artist is partially similar to the fate of Henri Toulouse-Lautrec: at the age of 3, Victor fell unsuccessfully off the bench, injured his spine, which caused his hump to grow. The artist hid from sadness in art. However, if Lautrek was watching mainly people, then Borisov-Musatov – for nature.
Victor Elpidiforovich Borisov-Musatov. The boy in the hat (Nude boy in the garden)
The boy in the hat (Nude boy in the garden)
Victor Elpidiforovich Borisov-Musatov
1898, 77 × 48 cm
Borisov-Musatov created stunning portraits (for example, “Requiem”, “At the reservoir,“ Ghosts ”), in which people appear rather like ghostly, fleeting characters. The eternity of nature and time is underlined.
Viktor Vasnetsov
In his work, Viktor Vasnetsov, one of the founders of modern Russian art has passed an interesting path from household painting to a serious, monumental, somewhere even pathetic. The painting “Gamayun, the Bird of Prophecy” is the face of Russian art nouveau. “The Knight at the Crossroads”, “Alyonushka”, “Ivan Tsarevich on the Gray Wolf” are excellent examples of art nouveau “mixed in” with national folklore.
Nikolai Kalmakov – a graphic artist, illustrator of Russian-Italian origin literally reveals the imagination of everyone who meets his work for the first time. Kalmakov is less known to a wider audience than, say, Beardsley or Benoit, but in vain. His work for the play “Salome” by Wilde – a classic theatrical graphics.
The artist wove mysticism into the paintings and knew that ugliness attracted no less beauty. His work is always relevant and attractively unsolved mystery – I want to peer into it. It sinks into itself.
Sergey Malyutin
The author of the painting of the first Russian nesting doll is known primarily as an architect and graphic artist, who honed the features of Russian modernism.
Widely known for the illustrations to the works of Pushkin: “Ruslan and Lyudmila.”