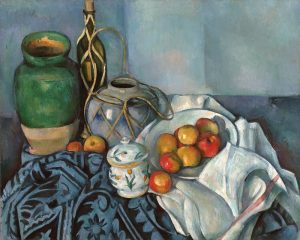 Folded fabric as a visual code accumulates a powerful expressive power. Since the beginnings of classical sculpture, drapery has been a powerful visual tool. In the Middle Ages, it appeared as a symbol of luxury and holiness. In our time, the fabric gathered in folds becomes a pure artistic element to which any representative interpretation can be applied.
It is considered that drapery “elevates” any object and makes it more beautiful. Not only because it is beautiful in itself, but also because of a long tradition that has come down to us since ancient times, in the form of an endless series of works of art
Spanish researcher Carmen Vidal resorts to the metaphysical concept of “folds” as a symbolic designation of the material and spiritual space of the 80s. XX century, pointing to its baroque character. It pushes off Gilles Deleuze’s essay “The Fold: Leibniz and Baroque”, in which the philosopher reveals matter as a tangentially moving texture without any gap, where the process of coagulation-expansion means not compression-expansion, reduction-expansion, but rather degradation development. Baroque aesthetics opens the era of the fold, its loud procession, which continues to this day. Deleuze believes that the fold has not exhausted all its possibilities, and today it is a “good” philosophical concept.
According to the late works of the philosopher Michel Foucault, wrinkle smoothing defines time as an absolute memory. It denotes an outer fold — time, which always coexists with an inner fold — oblivion: “Oblivion as the impossibility of return, and memory as the need to start all over again.” And all this determines the length of time.
Oblivion of oblivion means death, but as long as we speak of the inside and outside of the fold, being unfolds.
ANTIQUITY
In the Greek tradition, drapery is emphasized, regardless of whether it serves for a favorable image of the human body, or vice versa, the body acts as a frame for it. The ancient Minoan and Mycenaean art is practically not interested in the bends and folds of the fabric: the clothes were simply cut, customized, and sewn. However, the Greeks of the classical era transformed the image of a tissue element casually draped over a body into a source of aesthetic pleasure not only for themselves, but also for subsequent generations.
The Greeks were not strangers to the idea that clothing and modesty are interconnected – but in this function clothing was suitable for women, not for men. Fully naked female figure in Greek art appears rather late. A naked Greek man stands straight and often does not need any kind of drapery — or throws fabric over his back, in order to further enhance the beauty of the nude body.
Ancient masters endowed drapery with purely structural functions. For example, the lower part of the body of Venus de Milo is hidden by a cloth and is a stronger basis for the naked torso than required by anatomy, or Apollo Belvedere’s marble cloak, which is designed to maintain the statue’s outstretched arms. The vertical folds of clothes that enclose the bodies of Erechteion caryatids resemble column flutes. As a result, the sculpture representing a woman dressed in light clothing takes on a monumental look: because of the tension that occurs between the falling folds of the marble fabric and the absolutely direct position of the bodies, the tension softened by some difference in position.
In the late Roman sculpture and painting, customs in the depiction of draperies, which were used by early Christian artists, were first formed. These foundations survived until the Middle Ages, although various stylisations were allowed.
The figures, draped in the antique manner, appear on the sarcophagi, and also as an architectural decor, representing Christ and the apostles in the clothes of Roman statesmen and wise men. Thus, variations on the theme of the ancient costume turned out to be codified as a kind of timeless piece of clothing fitting for the attire of holy persons.