Rococo – gloss of the XVIII century 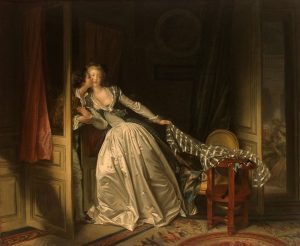 Rococo is called the most frivolous and thoughtless of all styles in art. Why then is rococo so significant for Russian visual culture? Why does the definition of the word “Rococo” sound so exotic for our ear – “rococar”? What is the main difference between rococo and baroque, which people of little knowledge often confuse? Finally, why is rococo the direct and immediate ancestor of modern glossy culture? All of this will be discussed below.
Rococo was born in France of the eighteenth century, although the name itself would legitimize only the next century, the nineteenth.
The style got its name from the French word rocaille – shell or sink. Since ancient times, artificial grottoes and bowls of fountains have been decorated with shells, and later, ornaments repeating the twisted, rounded outlines of sinks began to be actively used in the interior design. By the XVIII century, interest in them only grew. They became more complex and intertwined, becoming more sophisticated and bizarre. Such ornaments were called rocailles, and the style itself, built on whimsical curved lines and delicate color shimmers, was, respectively, rococo.
Antoine Watteau. Sign shop bench Gersen
They say that this picture, painted by a 37-year-old artist before his death, Antoine Watteau prophesied the future of Rococo. In the Gerssen Shop, all the coloristic possibilities of this style are already concluded: no contrasts, but in return – a rich and delicate pastel palette with the thinnest color transitions.
Rococo is a way of life
The appearance of the Rococo style is associated with the “end of a beautiful era” – the era of Louis XIV. It is not by chance that the famous “Gerssen Shop” depicts how the portrait of the Sun King is removed from the wall and put away in a box.
But it would be wrong to identify the whole XVIII century only with the rococo style. This century is as varied as any other of the preceding. While changing, in art, passionate baroque and strict classicism continue to exist. Sentimentalism is born. Progressive criticism in the face of Denis Diderot even tries to guess the beginnings of realism.
And yet it is the gallant, capricious, artsy rococo becomes a landmark for the XVIII century. No wonder this “century of wigs, carriages, minuets, triangle” (Nathan Aidelman) is also called the “gallant century”. Gallant century – gallant art.
Twisting tree branches, a moth fluttering with ease, a beauty, her flying along a crooked rocaille shoe’s trajectory, languid glances and bare knees. In the painting by Jean-Honore Fragonard “Swing” is the quintessence of the Rococo lifestyle.
With the departure from the stage of Louis XIV, the grandiose pomp of the baroque court festivities disappears from fashion. And in general – everything majestic and everything solemn is no longer comme il faut.
Regent Philip of Orleans, and then King Louis XV, prefer a way of life that is somewhat more chamberly, but also more comfortable. It is not concentrated in a wide circle of courtiers, but in a close, almost intimate circle of like-minded friends.
Rococo philosophy is neo-epicurean. Only pleasure is the essence of human life. The perfect pastime – carefree flirting in the lap of nature. Love and celebration become synonymous with rococo.
From the state halls, art moves smoothly into the boudoir. Rococo interiors are cozy and comfortable. It was at the time of Rococo that exquisite couches with soft backs and armchairs “cabriole” with twisted legs appeared, providing comfort to the body, silk lanes on the walls and small graceful figurines that give pleasure to the eye.
Michel Clodion, whom contemporaries called Fragonard in Sculpture, defended Rococo’s artistic principles – pay attention to the bizarrely curving and intertwining lines in his Satyr and Bacchana figurine.
Caprice and whim – “Rococo alpha and omega”. This applies to both the general mood and the art forms themselves. Improvisation replaces discipline. Freakish asymmetry overcomes classical balance and clarity.
Rococo age
An interesting feature of the Rococo style is its relation to age. For the first time in history, old age is no longer associated with wisdom and honor. Getting old is now undesirable and even shameful. This applies not only to women, but also to men, because the very type of appearance that was popular in Rococo times is gender-universal.
Francois Boucher. The head of Louis XV. Dmitry G. Levitsky. Portrait of Maria Alekseevny Dyakova. Fragment
Francois Boucher. Head of Louis XV. 1729. Los Angeles, the Getty Museum.
Dmitry Levitsky. Portrait of Maria Dyakova. Fragment. 1778. Moscow. State Tretyakov Gallery.
The appearance of men and women in Rococo art becomes remarkably similar. Both those and others are equally pampered and capricious. Both those and others are more gracefully dressed.

THE GREATEST HISTORIES RELATED TO FANCESFakes exist almost as much as the works of art themselves. And with the development of technology, the opportunities for dishonest artists and art dealers are only increasing. Experts say…