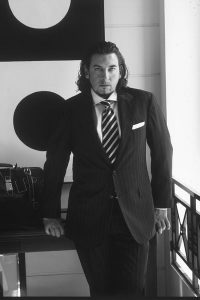 Retro-style photography never goes out of style. Proof of this are the works of the famous Russian art-photographer Vladimir Klaviho-Telepnev. Photo assembly – a fresh interpretation of half-forgotten truths, a new reality of old things. In our particular case, we will discuss the revival of techniques and the philosophy of the discoverers of photography, lightly dust with dust of time, as well as a synthetic method of creating photographs, organically combining the “yesterday” and “today” of photo art. Vladimir Klaviho-Telepnev, a well-known Moscow photographer, developed his own corporate style – a monochrome print with an artificial “aging” of prints, known as “ruinization”. Unfortunately, the printing industry is not able to convey the charm of the mirror photographic images, the complex technique of which involves a three-dimensional, multi-dimensional image. Therefore, in the framework of the magazine, we will limit ourselves to a demonstration of a new joint photo project by V. Klaviho-Telepnev and his student Yulia Bochkova, The Cherry Orchard.
Vladimir Klaviho-Telepnev was born in 1962 in the city of Moscow.
In 1986, he graduated from the Moscow Polygraphic Academy with a degree in graphic arts.
From 1986, he worked as a photo reporter for a number of Italian, French and Spanish publications, successfully continuing his family dynasty (his grandfather was a photo studio owner, his father was a photographer, and a master of event photo stories).
At the same time, V. Klavikho-Telepnev took an active part in exhibitions of paintings and drawings by Moscow artists.
Since 1999, Vladimir has been creating his own photographic projects, teaching photography at the Faculty of Journalism of Moscow State University. MV Lomonosov and the Academy of Design.
In 2001, according to the Moscow House of Photography, Vladimir Klavikho-Telepnev was recognized as a classic of Russian artistic photography, and in the rating of the Kommersant newspaper the maestro was named one of the two best photographers in Russia.
V. Klavikho-Telepnev is a member of the International Association of Graphic Artists, a member of the Union of Photo Artists of Russia.
Interview with Vladimir Clavijo-Telepnev.
– Vladimir, why did you choose the art direction from several possible scenarios for the development of a creative career?
– I came to this choice gradually. He started his way from a reportage photo, for ten years he made photo reports about Russia for the Spanish, Italian and French press on various topics: politics, culture, “hot spots”, etc. He worked for news agencies and glossy magazines, quenched the information hunger of the foreign public on the wave of increased interest in post-perestroika Russia. Then for some time he was engaged in fashion-direction, fulfilled orders of several respected modeling agencies, collaborated with fashion magazines, where he earned himself the reputation of “fashion fogrofa.
– And in the end refused such a “gold mine”?
– Because I did not have the possibility of creative realization in this direction. Our magazines shamelessly copied ideas from Western glossi, stylists and art directors dictated their vision to the photographers, and this work had nothing to do with artistic photography as a result – the photographer was required, in fact, only to press a button. Fashion – photography is generally focused on the momentary, it dulls the eye and does not allow the photographer to develop. Therefore, it is not surprising that pretty soon this process seemed boring to me.
– What attracted you to art photography?
– Let’s start with the fact that by education I am a graphic artist, an illustrator, graduated from the Moscow Polygraphic Institute, studied painting and etching for a long time, and finally turned to photography as a very effective way of creative expression. Photography, in its essence, is a kind of artistic language, one of the many techniques that allows you to convey to the audience the thought form, the intention of the creator. The laws of art are universal for its different directions. Therefore, the principles used to create paintings, are quite applicable in the genre of photo art.
– Please tell us more about the Cherry Orchard project. Why did you turn to this topic?
– The idea of ​​the book, consisting entirely of photographs, was born to me a long time ago. On the one hand, the world in which we live is becoming increasingly focused on visual information. Illustrations play an important role in the perception of artistic images and, in some cases, even prevail over textual content. On the other hand, Chekhov’s “The Cherry Orchard” is a play studied far and wide by contemporaries, provoking directors and artists to numerous “remakes”. Our project is another attempt by means of photography to create a logical video series, a kind of storyboard film created by a well-known artistic work. In my work I often turn to literature. In comparison with the same fashion-direction, which offers the viewer a flat template with an unequivocal interpretation, there is a more rich history in the art-photo genre. Fashion from this point of view – tabloid literature, and artistic photography, I equate to the classics, a serious novel.