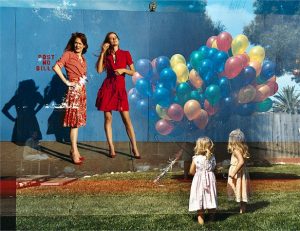 Double exposure as one of the ways to create a multi-valued frame, resembling either a dream or a mixture of realities, has always attracted photographers. Intentional vagueness, allegorical and even mysticism are the characteristic features of such works. We represent 15 authors working in this genre.
Another French photographer, Jean Baudrillard, said: “If there is no such ambiguity, this tremor, if the action is completely mechanistic, if the system is unmistakably focused, then we will be on the verge of insanity. Only an image that takes into account the tremors of the world, whether it be a situation or an object, a military photo or a still life, a landscape or a portrait, an art photo or a reportage, will be truthful. ”
By the way, Alexander Rodchenko was one of the first Russian photographers to apply the double exposure technique. Most often he used this technique in portraits.
Sergey Varaksin is a Soviet-trained professional who owns all types of photographic equipment. Surprisingly interesting person, he successfully participates in various exhibitions, his work won many awards. His latest achievement was the inclusion in the shortlist of the Sony World Photography Awards in 2013.
Petersburg photographer Nikita Petrov shoots exclusively in the double multi-exposure technique. Two of his solo exhibitions have already passed with great success, and this is in addition to participation in the collective ones. A tireless experimenter, Nikita shoots both analog and digital cameras and sometimes … calls his style a marriage.
Another Petersburger, an “experienced amateur photographer,” as Oleg himself calls himself, shoots philosophical city landscapes with thoughtful figures.
The works of the St. Petersburg photographer Konstantin Naumov are multi-layered both literally and figuratively. Their essence is impossible to grasp with the fly, they require thoughtful, unhurried contemplation, attract the viewer and do not let go, liberating his stream of consciousness.
A graduate of the Moscow Architectural Institute, a member of the Union of Architects of Russia, he takes an active part in the work of OISTAT – the International Organization of Architects, Stage Designers and Theater Artists. Alexander Orlov became involved in photography in 2000, in just a few years he achieved world fame, and in 2008 became a nominee for the prestigious Hasselblad Masters Awards.
Guillaume Ziuli – famous French photographer, a member of the agency VU. For many years he has been actively cooperating with the French press: Liberation, Le Monde, Telerama, Le Nouvel Obs. In 1996, he began work on the project “Double Exposure: Photography and Memory,” based on the idea of ​​the city as a repository of memory, and for more than 10 years photographed the largest cities and capitals in double exposure technique. Guillaume Zuli works with a highly sensitive black and white film. He is often called one of the pioneers of the multi-exposition genre, his works are exhibited around the world. Today he lives and takes pictures in the USA.
Another well-known French photographer Christopher Relander began shooting at an early age. Thanks to his unique creative approach, today he successfully works with such international clients as Adobe, Nikon and Oxford University Press. Of particular fame was the series of works by Christopher with a double exposure between man and nature.
“My task as an artist is to find the truth, understand who I am, and strive to create works of art that will inspire people to do a good deed,” he said in one of his interviews.
Jasper James is a famous American commercial photographer, among whose clients are Volvo, Ferrari, British Airways, Ritz-Carlton, Vanity Fair and other famous brands. Along with professional orders, Jasper takes a lot for himself. One of his most famous projects is City Silhouettes, philosophical frames in which the silhouettes of the citizens and the urban landscapes of Beijing organically merge.
Aneta Ivanova is a young photographer from Bulgaria. She began shooting at the age of 13, mastering photography completely with her own strength. Most of all she is interested in the portrait genre, in which she works very successfully using multi-exposure technique.