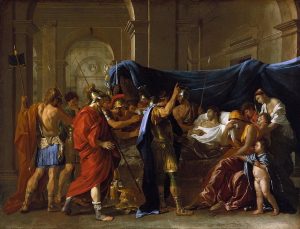 Classicism firmly established in the 17th century European art, having surrendered its position only in the first third of the next century. The classicists worshiped antiquity, piously believed in the idea of ​​the order and logic of the universe, as well as in the limitless possibilities of the human mind.
The time of occurrence, landmarks and artists of classicism
Classicism appeared and was formed in the XVII century. in France, the heyday of absolute monarchy and subsequently spread to Spain, Germany, England, the Netherlands, the USA and Russia, where it arose in the process of Europeanization under Catherine II, who introduced the fashion to everything French.
The standard for classicism was Greco-Roman antiquity, which is reflected in the name of the direction: Fr. classicisme comes from lat. classicus, i.e. “exemplary”, “belonging to the first (highest) class of Roman citizens. The art of ancient Greece and ancient Rome was declared a model of harmony, which can be achieved, guided by reason.
The assertion of Descartes Cogito ergo sum (“I think, therefore I exist”) characterizes the philosophy of classicism in the best way possible. The work of classic art was built according to strict canons and sought to become a prototype of the initially harmonious Universe. The purpose of creativity was the knowledge of truth, and the task was to educate a person according to the laws of morality and ethics. An important theme of late classicism is the clash of civic duty and personal interests, which have been sacrificed for the good of higher ideals.
Classicism has built a hierarchy of genres, the mixing of which was not allowed: historical, mythological and religious painting belonged to the high, still life, landscape, portrait to the low.
The most famous classical artists: Nicolas Poussin, Claude Lorrain, Jacques-Louis David, Jean-Auguste Dominique Ingres, Karl Bryullov. Sculptors: Antonio Canova, Bertel Thorvaldsen. Architects: Claude Perrot, Andre Lenotr, Christopher Ren, J. Quarenghi, Charles Cameron, Vasily Bazhenov, Matvey Kazakov.
Periodization: different countries – different systems
The timeframe of classicism in different countries is designated differently, and therefore there is confusion in terms.
In France, classicism is called the style of the XVII – early XVIII century., During the reign of the Sun King Louis XIV. Neoclassicism – the style of the second half of the XVIII century. – the first third of the XIX century.
In Russian art criticism adopted a different dating:
I. Classicism XVII. It appears in France under Louis XIV in the era of the formation of an absolute monarchy, which opposes the idea of ​​rationalism, order and system to chaos and fragmentation of the feudal principalities. For the standard is taken Greco-Roman antiquity. Important milestones: Descartes rationalism and his program work Discourse on Method (1637); treatise “Poetic art” (1674) Nicola Bualo; the construction of Versailles – the “temple of harmony”, in which a strict hierarchy reigns; the works of artists Nicolas Poussin (1594−1665) and Claude Lorrain (1600−1682); the opening of the Academy of Painting and Sculpture in Paris (1648); the tragedies of Corneille (1606−1684) and Racine (1639−1699), who were called the new Aeschylus and Euripides.
Ii. Classicism XVIII — XIX centuries. Classicism – the main style in France in the era of Enlightenment, the French Revolution and the First Empire, as well as in other European countries and even in the United States. In the XVIII century. interest in antiquity acquires a “second wind” due to three factors: the excavations of Pompey and Herculaneum, begun in 1748, the works of the German enlightener Johann Winkelmann deified the art of Ancient Greece and Rome, and the cult of Raphael, who was glorified by the influential artist Mengs.
In Russia, classicism dominates from the second half of the 18th to the first third of the 19th centuries. with the “enlightened empress” Catherine II, obsessed with the cult of statehood. In the art of late classicism reigns the cult of the heroic. Important milestones: works by artists Jacques-Louis David, Jean-Auguste Dominique Ingres, Karl Brullov, sculptors Antonio Canova and Bertel Thorvaldsen; the construction of the Arc de Triomphe (1806−1836) and the Vendome column in Paris, the Brandenburg Gate in Berlin (1788−1791), the foundation of the Academy of Fine Arts in Russia (1757), the construction of St. Petersburg – North Palmyra, the most ambitious masterpiece of classicism.
In the XIX century. Classicism is in crisis: from the once progressive, it becomes a conservative and academic style that holds back the development of art. In place of classicism comes romanticism.
Classicism of the XVII century: the beginning and flourishing
Classicism XVII. Russian art historian Sergei Daniel calls the “Poussin era”, as the French artist Nicolas Poussin (1594-1665) is the ancestor of early European classicism and its most prominent representative.
Poussin was a passionate admirer and connoisseur of ancient art, literature and philosophy, he spent half his life in Italy, where he studied ancient Roman sculpture, as well as the works of Renaissance masters, among whom he put Raphael and Titian above all.

SVETLANA POZHARSKAYA: MASTER OF SPIRAL PHOTOSvetlana Pozharskaya has always been attracted to art, and to art, not large-scale and official, but to her own, personal, sincere. As a child, she literally fell in love with…